Learn the Basics of Git: Install, Use and Push a Project to GitHub

WebTechRiser.com > Productivity > Learn the Basics of Git: Install, Use and Push a Project to GitHub
Posted on September 26, 2019October 8, 2022 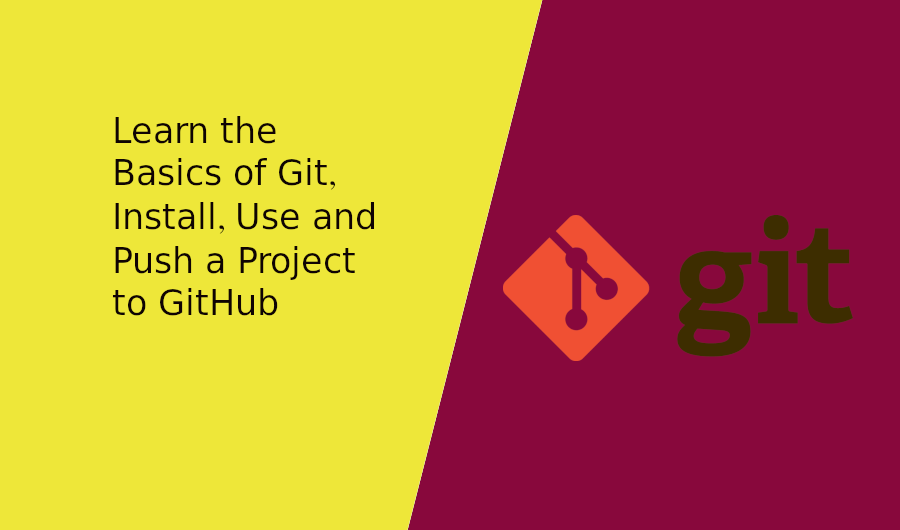 GitHub is a site for hosting codes. Usually, open-source projects are hosted on GitHub and shared with other developers. By using GitHub, anyone can work on any project, from anywhere in the world.

Ever used (Ctrl + Z) while writing in Microsoft Word? If you make a mistake during work time, you can fix it and return to the previous state. This feature is available when creating a project using Git. Suppose, we have added many features to a project. But, my computer doesn’t save my newly added features; it won’t even remember the date and time of those feature inclusions.

In course of writing the code, we felt that the feature I had added three days ago was a good one. Meanwhile, the current codes are bad and problematic. Now, you want to go back to the earlier code, how can you do that? Who wrote which pieces of code? Which code follows which? – How can these be managed? Git is the only way to solve such problems.

After installing Git, you need to go to the path setting and add the Git path. For example, “C:\Program Files (x86)\Git\cmd“.

After installing Git we need to set the email and name. For that you have to enter the following two commands:

If you want to see if the user name and email have been set up correctly, go to the command line or terminal and enter the following commands:

Push a project to GitHub

Good to say, Git and GitHub are two different things. One is the version control system. Another is hosting. GitHub hosts Git projects.

Next, I’ll create a repository with a convenient name.

After creating the repository, I will show you the Git commands of how we can push a project. Do the following:

Now, we will create a project that we will push/upload to GitHub. First. let’s create a folder on the desktop called “Git-push-demo”. Let’s create a file inside this folder and open it and write any code in the file. C, Java, C ++, PHP, C # – whatever you want. I’ll just create an HTML file as a demo. Name it, index.html. Just writing “<h1>Hello World!</h1>” inside it. Following the same principle, we can upload any project we want.

We need to initialize the Git in the Git-push-demo folder. I’ll go to the command line for that. Then change the directory and come to Git-push-demo. For that we have to write:

Next, I shall write the following code to initialize Git:

Then, a local Git repository will be created in our Git-push-demo folder. This time, our task is to add our project files to this repository. For that, I’ll write:

“git add .” – means adding all the files to the Git repository. Since there is only one file in our project, only one will be added.

adding the file, I will commit. I’ll write like the following:

Now we are ready to push this project to GitHub. The location we push on GitHub is called Remote Repository. To push the remote from the local repository, we need to first add the URL of the remote repository. I will get one URL for each GitHub project. For example, the URL of our Git-push-demo is https://github.com/manzurahmed/git-push-demo.git. “manzurahmed” is my username. To add a remote repository, type,

Then I will push it by typing,

Now, it will ask for your GitHub username. Then, the password. Then, press Enter to upload our project to GitHub. When it’s all done, a “success” message will appear.

And if you go to GitHub and check the repository, you will see our project.

There was only one file in our project, index.html, we can see only that file.

It is very important to know how to use Git to work on a large project on your own or with a team. Only the basic usage of Git is shown above. We have seen how to create a Git repo, commit to Git, how we can push a project in GitHub, etc.

Suppose, we have accidentally deleted the project on our local PC, which may be on the desktop. Since our project is available on GitHub, we can easily download it from GitHub. The project can be downloaded in zip format. We can clone it with Git if we want. Then a copy of our project will be made locally:

One more thing! You also need to know about “pull“.

“Pull” is used to download a project from the server to your own folder or to update your local project.

Now suppose we have done some excess work. We do not want to commit those actions. We can write to eliminate these tasks with the help of the Git command.

We can use the above-mentioned command to remove it after we accidentally write anything excessively.

The above functions of Git are quite simple. When a developer works on a project, the above commands are usually more used. However, working on a team requires a few more commands. Because, when we work on a team, many developers work together on the same project. It can be seen that each person is assigned to work on a number of features. And that’s where Branch’s idea came from. One person works at one branch.

Once a feature’s work is completed, everything has to be linked back to the original project. It’s called Merge.

To create a new branch, write:

One developer can work on the same file by making a branch. For example, the “home” page is very complex to code in a project. Someone is dealing with the “menu” section, while another developer is assigned to work with the “sidebar”. Now, these two developers have to work on the same file. For this, they will make two brunches, such as “menus” and “sidebar”. If two people are at two branches, no one will see each other’s code. Then once we have merged the two brunches, the menu and the sidebar will become one.

Once the developers have finished developing the “home” and “about” pages, or the “menu” and “sidebar” are finished, we will merge the branches.

Then again merge the “about” branch with the “master” branch.

For that, we will write,

Then, all our work will be merged with the master. This way we can create as many branches as we want in a project. To view branch listings,

A star sign will show up next to the branch we’re at. To know what status or branch I am in,

Thus, we wrap up working with a branch. After merging with the original project, we can delete one branch if desired. In order to delete a branch, write,

For example, to delete the “about” branch, I shall issue the following command,

If we upload our project to GitHub or any other remote site, and if we want to delete our branch from that remote site, we need to write,

If you are curious about the details of Git Branching, the learnGitbranching website is a good resource. This website provides detailed learning about Git Branching in an interactive way. It’s free.

You can create a private repository here. You can add your own team. There are many features to work with bitbucket.

Many complex projects can be managed with Git. But, you have to learn, right? Git Learning can be started from the link below,

Search Google for many more tutorials. Gradually, a good skill will be acquired. Then you won’t be creating any project without Git.

Knowing these, you can work on almost any large project. To find out more about Git branching and merging, you can learn from the sites of your choice by searching Google or the following two,

In addition, if you find it difficult to use a terminal or command line, you can use SourceTree.

The commands required for Git can be easily learned from “Try Git“.

12 Must Have Google Chrome Extensions for Graphic Designers

Thorough Instructions On How To Write Catchy Email Subject Lines

75+ Sites for Free Stock Photos for Your Themes, Blogs & Articles